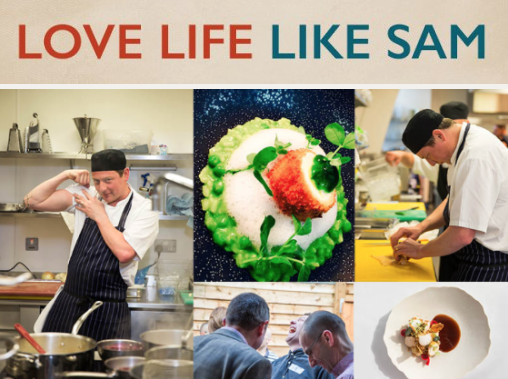 On Monday 29th February 2016, Harbour & Jones Events held a fundraising dinner for the family of chef Sam Sommerville. Sam worked at H&J from May 2014 until his sad death in an accident whilst on holiday in August last year. During his time with H&J he taught his colleagues and peers around him to really love life.

One hundred and sixty guests attended our dinner at The Royal Institute of British Architects to help raise money to support Sam’s children Eva and Charlie over the coming years. Tables were decorated with hula girls, leis, rubber ducks and plastic chickens and a blow up palm tree accompanied guests at the bar. The menu was made up of the H&J awards finalist dishes, the main course being Sam’s own buttermilk chicken and cauliflower, which he named ‘The bird & white curd’.

A cabaret performance by alumni from The Royal Academy of Dramatic Art played Sam’s favourite songs by the Arctic Monkeys and Oasis, whilst a fundraising auction saw guests purchase lots including dinner for eight at home cooked by H&J chefs and a Mercedes Formula 1 cap signed by Lewis Hamilton and Nico Rosberg.

We were delighted to have the auction further supported by renowned chefs Ollie Dabbous and Jeff Galvin who generously donated lots, including signed cookbooks and tasting menus, with matched wines, at their establishments Dabbous and Galvin La Chapelle. H&J also received huge support from their suppliers with prizes and sponsorship. A special thanks goes to Jascots Wine Merchants whose Ben Scott performed auctioneer duties.

The dinner surpassed our original fundraising target, raising just over £18,000 in total. This money will help support Eva and Charlie during the coming years and the family are hugely appreciative of the effort made towards this.

We would like to thank everyone who attended the dinner and supported this cause.