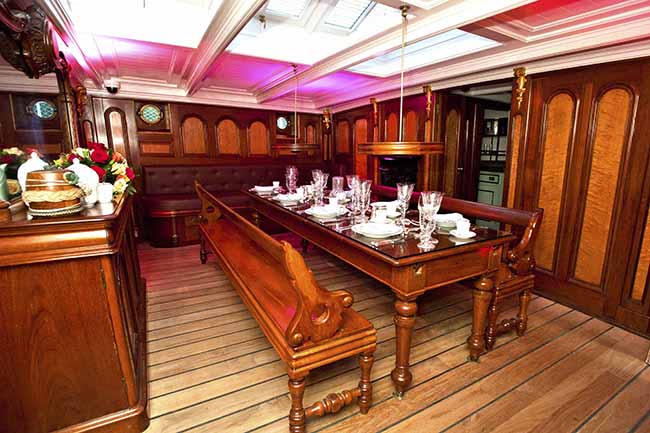 Harbour & Jones Events hosted the first event in Cutty Sark’s Master’s Saloon since the ship re-opened to the public in April 2012. The Saloon was last used by the Master on the vessel’s final voyage as a cargo ship in 1922.

The unique space is located on the top deck and in its previous working life was used by the ship’s master to entertain guests while in port, or to study the charts while at sea.

Starting at 7pm on Tuesday 4th June, guests were greeted with a champagne reception and canapés in the glorious sunshine on the weather deck with expansive views over the Thames.

Exploring its history, curator Jessica Lewis took guests on a tour of the ship’s rich and famed history before seating for dinner in the saloon at 8pm.

Harbour & Jones Events, who also runs the Even Keel café at Cutty Sark during the day, brought in its special event chef, Steve Fitzgerald who cooked up a starter of pea veloute, white truffle and Parmesan crisp, followed by mains of sea trout confit with Dublin Bay prawns and fillet of Aberdeen Angus with oxtail ravioli. Finishing off the meal was new season’s Yorkshire rhubarb, Sauterne jelly with rhubarb juice and mascarpone.

Adding an extra touch of magic, guests were served coffee and petits fours on the weather deck to watch the sun go down over the iconic buildings of Canary Wharf.

The intimate saloon seats a maximum of 10 guests and already looks set to become one of the most sought-after and unique event spaces in London.